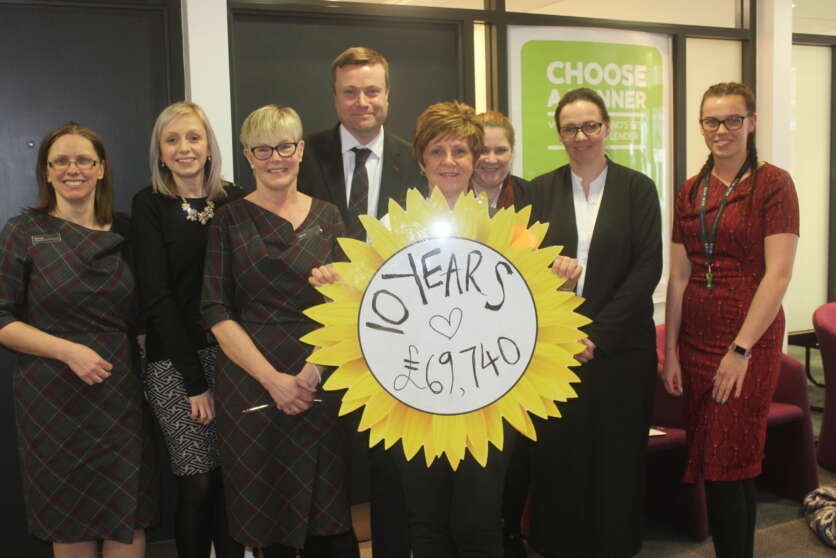 Clydesdale Bank branches across the Highlands are celebrating having raised £69,740 in support of Highland Hospice over the past 10 years.

The week-long celebration, which took place from 19-25 March is part of a ‘Decade of Difference’, marking ten years since Clydesdale and Yorkshire Banks formed a partnership with Hospice UK, the national charity for UK hospices. During this time £6 million has been raised with 124 local hospices directly benefitting.

Bank staff and customers across the Highlands have fundraised in a variety of ways since the partnership began, including holding bake sales, participating in races, cycle challenges and treks and donating prizes such as football tickets. The banks’ employees have also entered a number of Hospice-organised events, including its popular dance competition Strictly Inverness, and have offered their services as volunteers for the charity.

Highland Hospice’s Corporate Fundraiser Lisa Long visited branches during the ‘Decade of Difference Week’ to thank them for their support.

Lisa said, “We are so grateful to Clydesdale Bank for the huge amount of hard work they have put in since this partnership began. To have raised almost £70,000 is a fantastic achievement, and a huge help in supporting our patients and their families at a difficult time. Thanks so much to Shelley and all her colleagues for everything they do for us.”

Shelley O’Neill, Commercial Relationship Manager, Customer Banking, Clydesdale and Yorkshire Bank Group, said “It's been a privilege to work with Highland Hospice over the last ten years and help support them with the fantastic service that they provide to their users.  We're delighted to have raised almost £70,000 locally and look forward to continuing the relationship.”

David Duffy, CEO of Clydesdale and Yorkshire Banks, added: “I am delighted that together with Hospice UK we have reached such an incredible milestone raising over £6 million for such a vital cause. I am especially proud of the thousands of hours of volunteering our employees have given to hospices up and down the country. That in itself is a wonderful achievement."

Tracey Bleakley, CEO of Hospice UK, said “We are so grateful for this partnership with Clydesdale and Yorkshire Banks and all that it has achieved. People have given money, time and effort, but most of all they have used their passion and energy to show what can be done locally and nationally to help others. The world has changed a lot in 10 years, but thanks to this support for hospices from Clydesdale and Yorkshire Banks, for many people the care they received at the end of their lives has been transformed.”