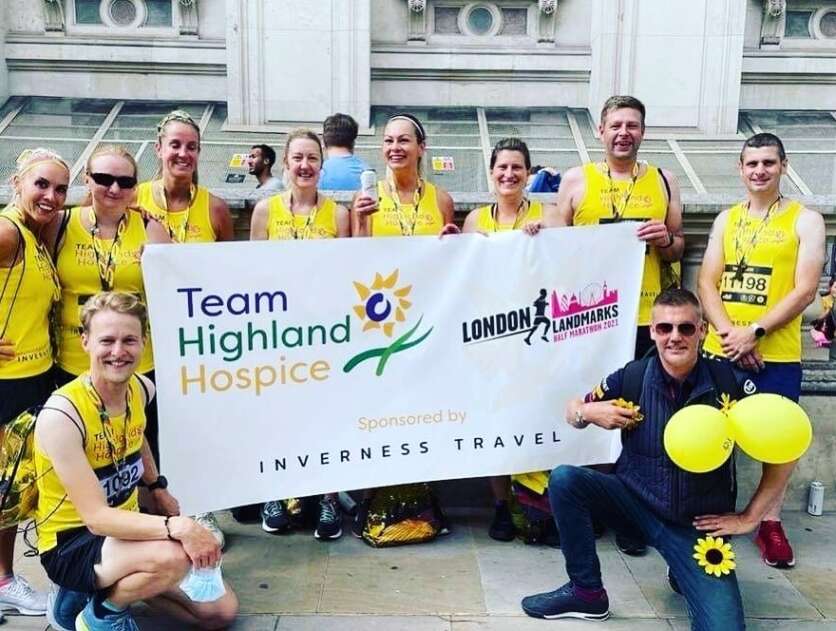 Nine charity runners for Highland Hospice completed the London Landmarks Half Marathon on Sunday. The event was attended by £14,500 runners and was the first large scale running event since the lifting of Covid restrictions.

The runners were joined by Scott Murray from Inverness Travel who generously sponsored their participation covering flights, accommodation and providing an itinerary for the entire weekend. Scott also attended the event armed with Hospice balloons, sunflowers and banners to cheer them on."

Collectively, ‘Team Highland Hospice’ have raised over £8200 for the charity.

Sunday's running squad consisted of Wendy Morgan, Marc Wilson, Jackie Carruthers, Jude Colligan, Chloe Robertson, Will Robertson, Andrew Morgan, Kellie Calder and Lee Thomson. The fundraising total was also contributed to by Brian Cameron and Shelagh Kerr who had signed up for the original date in March 2020 and each ran their own virtual Half Marathon last year.

Wendy Morgan said, “This was an incredible challenge. The atmosphere was phenomenal at the event with lively cheer stations all the way around.”

“We had an amazing team in London with great camaraderie. Our runners were of all abilities - some highly experienced and fast and others, like me, who had never attempted anything like this before.

Those who finished quickly provided huge encouragement and support to everyone else, until we had all crossed that line."

“Our motto for the weekend was “Finish lines not finish times”. Our reason for doing this was to support the Hospice and we were delighted to have raised such a great amount.”

“This is the first time we’ve been a charity partner for the event, and it was such a great experience and so well organised that we would certainly participate again.”

“Biggest thanks has to go to Inverness Travel whose sponsorship and support was honestly incredible. We all came away with medals but the biggest one should go to Scott Murray!”