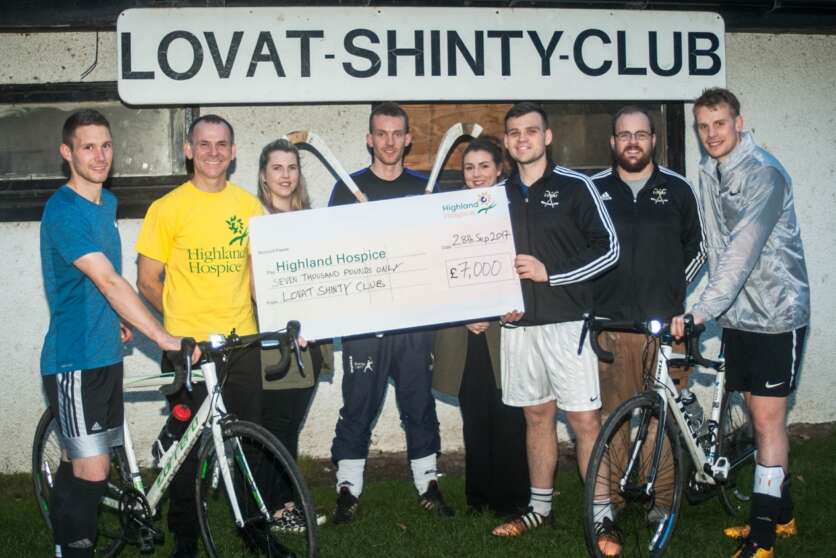 Six members of Lovat Shinty Club have raised a fantastic £14,000 with their ambitious 400-mile cycle which encompassed all 2017 Marine Harvest Premiership Shinty clubs.  This was spilt between the Lovat Shinty Club New Community Clubhouse Fund and Highland Hospice, each receiving £7000.

The cycle had an ascent of 16,000 feet, and took place from 31 July to 3 August, finishing in spectacular style on the main stage of the Belladrum Tartan Heart Festival (who selected the club as their lead charity this year) to the music of acclaimed local band Torridon.

The team, made up of Fraser Gallacher, Stuart MacDonald, Callum Cruden, Greg Matheson, Daniel Grieve and Drew Howie, began their challenge on Monday 31 July in Glasgow and over the four days visited each ground before arriving at Belladrum.

Continuing their support for Highland Hospice through this challenge, the cyclists also supported the club’s ambitious project to build a new sports pavilion in the village of Kiltarlity.  Here, the shinty club is a key social hub for many in the community.

Lovat Shinty Club currently encompasses one Premiership, one North Division team, one ladies team and two junior teams. Having won the Scottish Hydro Camanachd Cup in 2015, the club’s ambition is to capitalise on this success and inspire the next generation of players. Youth membership is growing year on year with regular coaching sessions.

The club will also provide significant benefit to the wider community with plans including a treatment room for the use of physiotherapists (including the potential use by NHS staff for outreach clinics) and a large social area for the local school and other constituted groups which will help alleviate the high demand for an additional community facility.

Callum Cruden from Lovat Shinty Club said, “The cycle was harder than any of us anticipated and the horrendous weather didn’t help matters, however it was an amazing experience and we were truly humbled by the response from everyone especially the shinty community and the clubs we visited. We had secretly hoped to raise £10,000 in total and we have exceeded expectations with an amazing total of £14,000. Thank you to everyone who donated and with the exciting news that the rest of the funding has been secured we can really look forward to our new community pavilion becoming a reality.”

Highland Hospice Fundraiser Katie Gibb added, “We are really grateful to Lovat Shinty Club for their continued support and for choosing to split their fundraising with Highland Hospice. £7,000 is such a boost to the Hospice and we can’t thank the team enough for everything they have done”.