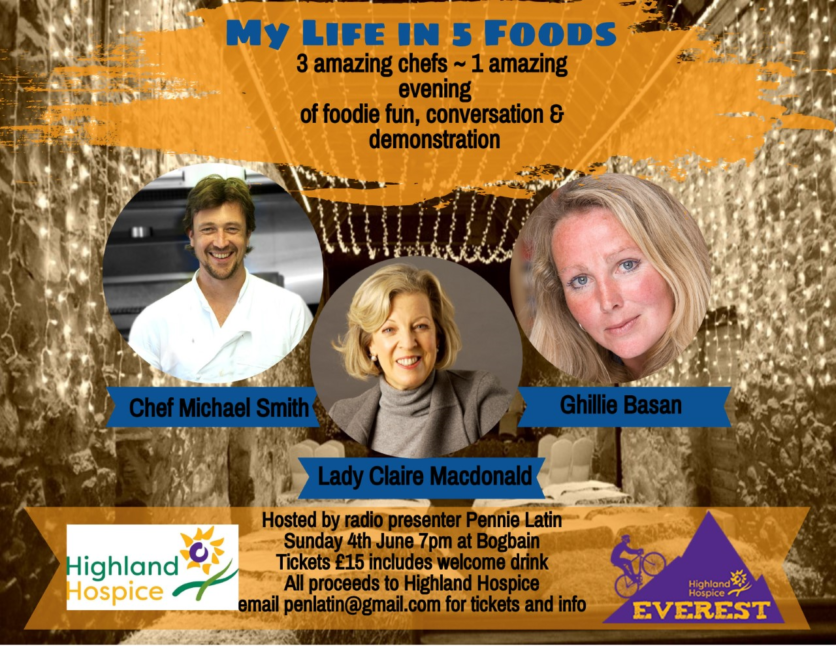 If you are what you eat, what does what you eat say about you?  In this light hearted evening of conversation, stories and food demonstration, three of Scotland’s top food stars share what their food passions say most about them.  Hosted by radio presenter Pennie Latin (BBC Radio Scotland’s Kitchen Café, Kitchen Garden and Brainwaves) the evening will weave through shared stories and experiences.  From discussions of early childhood favourites, the culinary landscape they each grew up in and the food which shaped their lifelong love of cooking and eating, to the comfort food they reach for when they need a bit of solace.

There will be a diversion into each guest’s personal food ‘hell’ – yes even foodies have food they can’t stomach – plus they’ll discuss the dish they make which says most about them as a person.   Finally, in a poignant reminder of the event’s connection to Highland Hospice, each guest will consider what dish they’d want to be their final meal.

Highland Hospice Community Fundraiser Emma Nicol said, “This is going to be such a fantastic event, and we are so grateful to everyone involved for hosting it in aid of Highland Hospice.”

Tickets are £15 including a welcome drink.  For more information and tickets contact Pennie Latin by email to penlatin@gmail.com

Claire Macdonald is one of the best known figures in the culinary world today. A hugely successful and critically acclaimed cookery writer for over thirty years, she has garnered numerous awards and has appeared regularly on TV and at cookery demonstrations and courses all over the globe. In addition to all this, for forty years she ran the award-winning and internationally renowned Kinloch House Lodge on Skye, one of the few Scotland restaurants to have won a coveted Michelin Star.   Claire marries great humour, honesty and warmth with an unwavering passion for great Scottish food.

Born in Africa to Scottish parents writer, broadcaster, and food anthropologist, Ghillie Basan has been dubbed ‘The Original Spice Girl’ and ‘World Food Expert.’ Her informative and internationally acclaimed books have been nominated for the Glenfiddich, the Guild of Food Writers’, and the Cordon Bleu World Food Media awards; they have appeared regularly in the ‘Best of the Best’ and ‘Top 50’ lists; and she has been described as one of the ‘finest writers on Middle Eastern food’. Her food and travel articles have appeared in the Sunday Herald, Scotland on Sunday, the Sunday Times, the Press & Journal, BBC Good Food Magazine, TasteTurkey, Eatinmagazine, Diet & Nutrition USA, and various internet sites and magazines. She has also been short-listed ‘Pasta Journalist of the Year’ and is a member of the Guild of Food Writers.

Ghillie is a regular contributor to Radio Scotland and other radio networks around the world and she acts as a consultant for chefs, spice brands, and food outlets. At her remote home in the Scottish Highlands she runs relaxed and inspiring cookery workshops which she describes as ‘taking people on a food safari” looking at the traditions and tastes of different cultures.

Inverness born Michael became a food legend at the stoves of Three Chimneys restaurant in Skye. For 10 years he grew and enhanced its reputation, achieving considerable critical acclaim. He consistently created and evolved dishes that reflected the restaurant’s surroundings, specifically utilising as much of the superb Skye and Scottish natural larder as possible. His style of gastronomy inspired by Scottish tradition and classical techniques received many accolades. Among them, The Three Chimneys was named by New York Times food critic Franck Bruni as one of his top 5 destinations in the world. More recently The Three Chimneys was awarded a Michelin star in 2014.

Today, you will find Michael at the Lochbay Restaurant on the Isle of Skye, having bought the business in 2016.

A passionate ambassador of Scottish gastronomy in 2012 Michael represented his country for the 3rd time on BBC’s Great British Menu, most notably this time, winning the main course place at the final banquet with his African inspired “I love kids….” goat tagine.

A BBC radio presenter and documentary producer with over 20 years experience you may be familiar with Pennie’s voice from BBC Radio Scotland’s long running food series The Kitchen Café and The Kitchen Garden not to mention the Shipping Forecast from the early days of her broadcasting career!   She’s also the mainstay of the long running highly acclaimed BBC science series Brainwaves as well as the producer of a vast array of radio documentaries over the years with subjects ranging from history and sports to literature and music.   Sharp, full of energy and with a wicked ready laugh you can be sure that any evening hosted by Pennie will be a highly entertaining mix of the irreverent, amusing, poignant and thought provoking.

When Pennie’s not eating or talking about food you’ll usually see her on a bike around Inverness and the Highlands.  A keen cyclist Pennie’s raising money for the Highland Hospice as part of her commitment to the Everest Highlander Cycle Challenge in September 2017 when she’ll be joining a team cycling 430 miles and 29,300 foot in height round the Scottish Highlands in just 5 days.